Do "liberal" and "conservative" have any meaning at all?

How Liberal Or Conservative Are You?

Among the saints who share this day with the great Cyril and Methodius and two martyrs named Valentine is St. Abraham of Harran.

St. Abraham was a hermit in Syria in the later 300s. Hearing of a poor pagan village in the Mt. Lebanon area, he left his solitude and went there to gain the village for Christ, setting himself up as a fruit dealer. The villagers really liked his high quality produce and honest low prices, but weren't so in love with his preaching, which they ran away from or poked fun at. Until the economy took a decided turn for the worse, and the empire's taxes came due, which none of the villagers had any money to pay.

They saw no hope, and were resigning themselves to inevitable dispossession and imprisonment, but Abraham, their crazy Christian fruit man, took out a loan and paid the taxes for the whole village. Thankful for being able to stay in their village and homes and out of prison, they were convinced that Christians were really good generous people, and might be worth listening to. In short order, the whole village was converted. Abraham stayed there for another three or four years, teaching, and working hard to pay off the loan, then he went back to his hermitage in the Syrian desert.

People from the village, then others who heard of him, went out to the desert to seek his spiritual counsel. One of those people was a young nobleman named Theodosius the Younger, who came out for regular spiritual guidance whenever he could absent himself from his noble duties. A big problem with having a highly-placed disciple is that one doesn't get to stay in one's desert hermitage --- Abraham was taken to be bishop of Harran in Mesopotamia. Despite his preference to go back to the desert, he was both holy and competent as a bishop, and the church at Harran thrived. When Theodosius became emperor, he kept Abraham as his spiritual director, and several times each year, Abraham went to Constantinople for his pastoral visits with the emperor. During one of these visits to the capital, Abraham died of natural causes, in the year 422.
.
Posted by Karen Marie at 9:09 AM 1 comment:

Today is also the memorial of Blessed Jacopa de Settesoli.

Jacopa was born in 1190, into a noble Roman family of Norman heritage, and was married in her early teens to a gentleman even more noble than she was, Count Gratien de Frangipani, whose family had been noted for generations for their charity.

In 1212 or thereabout, the recently widowed Jacopa met a tattered young preacher who was visiting Rome for an audience with the Pope and other Church business about his new young community. She was so impressed, she took him and his brother companions home with her for some personal counsel. If it were up to her, she'd follow him back to Umbria and join his Poor Ladies --- but it wasn't up to her. Her sons, the heirs to both the Frangipani and Settesoli estates, were not yet five years old, and it was her duty to manage the estates and see to the raising and education of her sons until they came of age. So, she asked Francis, how was she to live the Gospel, since she was not free to leave all and follow? He gave her very practical advice about humility and charity, and raising up her little boys in that way, and she followed it. This was the very first time Francis counselled a person who could not renounce all and become a religious. (But not the last. In due time he would write a rule of life just for them; the community that is now known as the Secular Franciscan Order.)

So she set out to live the Gospel, right there in Rome in her place of wealth and power as the Frangipani and Settesoli regent. She organized and financed direct assistance to the destitute of Rome. She located, bought, and donated the land for a hostel, then nursed in it herself once it was built. Whenever any of the Lesser Brothers needed to be in Rome, they were guests in her home, where they would be fed the same treats she made for her boys. She nursed St. Francis back to health several times. All of the brothers were entirely hooked on her almond cookies, so much so that Thomas of Celano wrote the recipe for them into one of his biographies of St. Francis. Once, in appreciation for the cookies, a brother gave her a trained pet lamb, which followed her everywhere and which would wake her up in the morning so she wouldn't miss Morning Prayer and Mass.

With the help of a vision, she was present at the Little Portion when St. Francis died, having brought with her from Rome all the stuff necessary for burial, and a double batch of the almond cookies, just as Francis has written to request in the letter that hadn't yet been sent.

Soon, her sons were both of age, and she moved to Assisi to be near the brothers and the tomb of St. Francis, and she continued her prayer and charitable activities there until her death in 1273, when she was buried in the same crypt as St. Francis, where her relics are to this very day.
.
Posted by Karen Marie at 12:47 PM 2 comments:

Nobody knew the name her parents called her 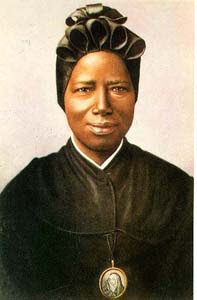 Today's saint, who would come to be called Giuseppine Bakhita, was born in a totally average family in rural Darfur, Sudan in 1869, and was kidnapped by slavers at about eight years old. Her kidnappers gave her the name Bakhita --- which means "fortunate, lucky". At the time that was a sick joke. She was sold repeatedly to various owners in the markets of El Obeid and Khartoum, and suffered all the standard evils, physical (beatings, malnutrition, neglect, scarification....), mental (forbidden to learn and "kept in her place"....), and moral (rape, molestation, coercion to service owner's sexual whims....).

Eventually, in her early teens, she was bought by an Italian diplomat and his wife to be an housemaid and cook. As owners go, these weren't very bad at all. They did not use the whip when giving orders. They would show her how they wanted things to be done. Neither of them insisted on sexual services. About as good as one could expect an owner to be. When the diplomat was recalled to Italy, Bakhita begged not to be sold, but to go with them. (Who could tell how the next owner would be?) So she went to Italy with them.

The diplomat's wife's best friend had a baby, a little girl named Mimmina, and Bakhita was given to the friend to be a babysitter-companion for the newborn. That family wasn't bad either. When Mimmina got to be school aged, her parents placed her in a boarding school run by the Cannossian Daughters of Charity, and Bakhita, of course, went with her as a maidservant. Expected to stay with Mimmina at all times, she began to learn the lessons Mimmina was being taught, reading and writing and arithmetic --- and, the Christian Faith, the first that Bakhita had ever heard it. Bakhita came to believe almost immediately, and eagerly sought even more instruction in the faith, and she was enrolled in the catechumenate. She also began to sense the first glimmerings of a calling to the religious life.

After a time, Mimmina's parents received an overseas diplomatic posting, and went to the boarding school to withdraw their daughter and take her, and, they totally presumed, Bakhita also, to their new African posting. But, Bakhita refused to go. She wanted to stay, and get baptised, and keep learning. With the backing of the Sisters, some of the Sisters' benefactors, and the local Catholic authorities, Bakhita's case to disobey her owners went to court, and it was ruled that, since slavery was illegal in Italy, that as soon as Bakhita was brought to Italy she was made free. Soon after, in January of 1890, she was baptised with the new name Giuseppine, and she remained under instruction at the school for several more years.

After a period of prayer and discernment, Giuseppine Bakhita entered the community of the Cannossian Daughters, making her vows in 1896. She served in the community as a seamstress and cook, and as the doorkeeper, and became noted as an intercessor. After her memoirs of her slavery days were published, she spend years on tour speaking to raise money for her community's missions. Eventually, her health declined, and she died on this date in 1947.
.
Posted by Karen Marie at 12:22 PM 2 comments:

Have you heard the words "incurable and fatal"?

or do you care for someone who has? Never thought about indulgences, in part because you just can't get out to church for confession and communnion in the timeframe? Well, for the World Day of the Sick on February 11th, these indulgences are for you. We've been remembered!
[hat tip to Wheelie Catholic]
.
Posted by Karen Marie at 5:54 PM 1 comment:

The precept of the Church to attend Mass on Sunday is not intended to risk one's life or health.

The predicted temperature at leaving-for-church time tomorrow morning will be minus11F. That's thermometer temp, not wind chill. It's supposed to be windy, also. So, if you do not have reliable heated transportation door to door to church tomorrow, STAY HOME!

Instead, set your alarm clock and at 8 am tune in Mass from the Cathedral, with our archbishop +Timothy preaching. North of the city, tune in 100.1 FM, in the city 920 AM, south of the city 1550 AM. Mass on the radio is so much less than actually being there, but it is such a blessing when one just can't get there.