and dwelled among us.

"Rejoice, Full of Grace, The Lord is with you. Do not be afraid, you have found favor with God. You are to concieve and bear a son, and you must name him Jesus. He will be great and will be called the son of the Most High....."

"How will this come to be, since I am a virgin?"

"The Holy Spirit will come upon you, and the power of the Most High will cover you with its shadow. The child will be holy and will be called Son of God. By the way, your kinswoman Elizabeth, elderly and barren, is now in her sixth month; nothing is impossible to God."

"I am the slave-girl of the Lord. Let it be done to me as you have said."

via the Archbishop Romero House of Hospitality, Oklahoma City, here's a prayer service in the way of Morning Prayer for the anniversary of the death of Archbishop Romero on Saturday the 24th.
.
Posted by Karen Marie at 2:46 PM No comments:

Stations of the Cross

So you are working, or need a sitter, or lack transportation, or for some other reason haven't been able to get to church for the Stations of the Cross this Lent? And, you'd still like to?

Well, why not try praying the Stations where you are and when you can, with my parish's virtual Stations of the Cross. The images are the actual stations in the Cathedral.

Continue to enjoy this happy Lent, and come to Easter with mind and heart renewed.
.
Posted by Karen Marie at 1:16 PM 1 comment:

The Unheralded Lesson of Sophie Scholl

Here's a fine essay on the witness of the White Rose Society (aka Sophie Scholl and companions).

Dave and Amy Pawlak's child CJ was delivered yesterday evening. Pictures of the latest St. Blog's baby can be found here at the Pawlak's blog Modern Commentaries. Congratulations and continued prayers for all.

What every new bishop needs to hear

from his faithful faithful.

With all the recent new bishops appointed, and as many retirements as are coming up in the next few months .... [I did tell this to +Timothy when he was newly-appointed.....]

Please, my father, if anything ever goes terribly horribly wrong, or if you ever discover you've done something really dumb or spectacularly stupid, do not waste any time or effort or money to protect us from it, just tell us. We have a duty to honor and care for you, as you do to honor and care for us. Embarrassment, even the public kind, does not kill; in fact it liberates in the long term. It's secrets that bind and maim and fester and kill. When there's bad news, we need to hear about it from you first, not from some church-political faction looking to use it as a cudgel, and not from some media outlet distorting and exploiting it for a circulation boost or extra Nielsen point. We Catholics are strong and resilient people, and we easily fall in love with our shepherds if permitted to at all. We can handle bad news. We can survive the trials and embarrassments of life. Be not afraid, my father, for yourself or for us; stand straight and step forward faithfully.

Today is the day for Perpetua and Felicity, whom we remember by name regularly in the Eucharistic Prayer. Read their story here, written mostly by St. Perpetua herself. (After she left prison for the arena, Tertullian finished it for her.)

Today is the memorial of Sylvester of Assisi.

Sylvester was of noble birth, and a priest, but he had neither nobility nor holiness, no credit to either noblesse oblige or the holy priesthood. He was money-hungry and totally attached to the comfortable life.

In the earliest days of Francis' conversion, before he learned to renounce money, he bought some stone from Sylvester for his church restoration projects, at the going market price.

Some time later, after Francis' contretemps with his father, his old partying buddy Bernard of Quintavalle was called to join Francis in following the Gospel, the first of the Lesser Brothers. Francis and Bernard proceeded to give away all of Bernard's possessions. Sylvester, seeing this, was exceedingly wroth, and came to them, claiming that he had been cheated in the sale of the stone and he wanted compensation, whereupon Francis and Bernard gave him several large handfuls of cash.

Back at his residence, the money was filling Sylvester with guilt, and contrition, and conversion. Sylvester renounced his venal greedy ways, gave everything he had away, and joined Francis and Bernard, the first priest to be a Lesser Brother. For many years he was Francis' travelling companion, then he became a hermit, dedicating his whole life to contemplation and intercession.

When Francis had his vocational crisis, about whether he should continue as a wandering preacher or himself become a recluse, it was to Clare and Sylvester that he went for counsel.

So Sylvester, an unworthy priest, came to his senses and became an exemplar of holiness.

from the documents of the most recent Ecumenical Council:

The Church, therefore, is very concerned that the Christian faithful not be present at this mystery of faith as outsiders or mute spectators,
but that, understanding the mystery through the rites and prayers,
they take part in the sacred action consciously, devoutly and actively,
that they be instructed by the word of God,
that they be nourished at the table of the Lord's Body,
that they give thanks to God,
that, offering the immaculate host
not only through the priest but with him,
they may learn to offer themselves,
and that, through Christ the Mediator,
they may be drawn day after day into more perfect union with God and with one another,
so that in the end God may be all in all. 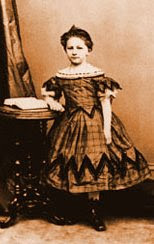 Katharine Marie Drexel, born in 1858, was the second of three daughters of an insanely wealthy banking and railroad entrepreneur. Her father and stepmother (her birth mother died when she was still a newborn, and as was traditional for widowed fathers of infants, her father promptly remarried....) raised her and her sisters in the tradition of noblesse oblige and with a love of generosity, which all three would follow into their adult lives. When Katharine nursed her stepmother through her final illness, she learned for herself just how little money and power matters.

At the passing of her father, she and her sisters came into their inheritance --- but it was structured as an untouchable trust, to protect them from fortune-hunting husbands-to-be. Remember, this was pre-feminist times, when all a woman's possessions became the husband's at marriage, for him to steal or waste at whim. The income of the inheritance would go to the daughters, and then to their children, for as long as they lived, and then when there were no more descendants, the principle would go to a list of the father's favorite charities. The income stream from the trust was about $3000 each day ---- in an era when $1000/year was considered a respectable annual income for a hard-working family man.

Katharine remembered the travels she took with her father into the West, and the poverty and oppression of the native peoples there, and into the South. She began building and financing schools on the reservations. She had an urging to retire from the world, but could not see how, unless she could find others to administrate the schools. So she went to Rome, looking for a community of European missionary sisters who could go to Montana and run her schools, so she could be free to enter a cloister. When she asked Pope Leo XIII if he knew of an appropriate community, he said, "Why don't you become a missionary?" Katharine took it as a word from the Lord, and, with the help of her bishop, received formation, and established the Sisters of the Blessed Sacrament for the Indians and Colored People, vowed to poverty, chastity, obedience, and to service to the Indian and Colored people forever. Because of the terms of her inheritance, however, she could not renounce it; she could only keep giving away the income every day she lived.

She spent the next several decades building schools and churches for the poorest people in the United States, and staffing them with eager young sisters and dedicated and justly compensated lay staff --- the money for this coming from the trust fund. All of her churches were integrated, except where that was illegal. Where integrated churches weren't legal, they would be quite subversively segregated --- the laws insisted on separation, not on colored people always having the bad seats. So they'd be segregated, colored on the main floor and whites in the balcony, or colored on one side of the center aisle and whites on the other. After all, there may be white and colored in Mississippi, but not in the Kingdom of God. In 1915, she founded Xavier University in New Orleans, the first Catholic University for Colored people in the US.

In 1935, she suffered a massive heart attack, from which she never fully recovered. She resigned as superior of the order she founded in 1937, and was able to fulfill her youthful desire to be retired from the world in contemplative prayer. And, to live just as long as the Lord would let her, so that the trust fund money would keep flowing, at least long enough for Xavier University to grow and have enough alumni to support it. [Her father had no idea that years after his passing his daughter would be a founder, so her order was not among those receiving the principle on her death....] She finally reposed, her work complete, in 1955, age 97.

It took seven attempts to get this computer to come up this morning, and another nine to get it up again when it crashed just now. In my experience, this is a sign that this lovely machine will soon die and turn itself into a doorstop. When it does, I will be missing, probably, for several months, while I organize a replacement.

Not only do I converse here, get my news here, learn what I'm supposed to pray for here, and play games here, but I also buy my groceries with this machine. [Can't trust cabbies to carry groceries to the door even after they are generously bribed, and the van service is limited to 2 bags/40 lbs which isn't much groceries, so I let Peapod deliver my basic monthly groceries.......] So when it finally gives up the ghost, things are going to get a bit rough around here. So, if you all can keep me and my relations with this machine in your prayers.........