If it wasn't Sunday

and the solemnity of the Holy Trinity, it would be the memorial day of the Martyrs of Uganda. But, given our own society's problems with the abuse of sex and power, these Ugandan teenagers are worth remembering, even when their memorial day gets bounced. 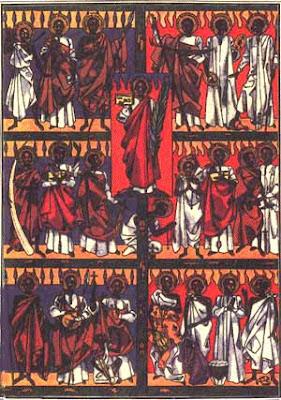 Sometimes you have to die.

Mwanga II came to the throne following the unexpected death of his father, Mutesa I. He had an older brother, but that brother was determined unfit to be king. Mutesa was a wise and tolerant ruler. He had welcomed the newly-arrived Muslim and Catholic and Anglican missionaries and had declared religious liberty in Buganda, but had himself remained a traditionalist --- he refused to be circumcised, a requirement to become a Muslim, and he would not abandon his wives, required by both varieties of Christian.

Mwanga II was not nearly so tolerant, however. Not that he had any real beliefs at all, except in the superiority of his royal self. He'd study Islam with the Arabs, or Anglican Christianity with the British, or Catholic Christianity with the French, or consult the shamen, whatever looked to be most advantageous economically and politically to his royal self. And, he considered it his right to be pampered in every imaginable way by the pages of his court --- including their service as his boy-toys.

When pages became Christians, they became extremely resistant to immediate blind obedience, and would hide, run away, or outright refuse to relieve the king's sexual tensions. Higher-ranking court Christians would actually tell the king that he was wrong!

There were sporadic executions --- such as three Anglican pages killed for going to catechism class after Anglican lessons had been forbidden. But the persecution began in earnest when James Hannington, first Anglican bishop of Uganda, was approaching the kingdom, from a direction that the local traditionalist shamen considered inauspicious, and Mwanga sent soldiers to massacre Bishop Hannington and his entire party. Mwanga's majordomo, Yosefu Mukasa Balikuddembe, a Catholic, told him that the killing of Bishop Hannington was evil and wrong, and Mwanga had him executed.

So, one afternoon in mid-May, 1886, Denis Ssebuggwawo sneaked out of the royal compound to Catholic catechism class, and took one of the traditionalist pages withn him, who had shown an interest in Christianity. Unfortunately, this page was Mwanga's current favorite boy-toy, and Mwanga wanted him, now!, and was furious to find out that he'd gone to catechism class --- and was likely to tell the king to buzz off, like all those miserable Christians did sooner or later.

So the king gathered all his pages. The head pages, who were both Christians, gathered their believers around them, and gave them strength. Karoli Lwanga, a Catholic and in charge of pages of the inner court, baptised those who had not yet been baptised. Moses Mukasa, an Anglican and in charge of the outer court, had not received permission to baptise, so the newest Anglican converts went to their trial still catechumens.

In the assembly hall, after a long harrangue about the duties of pages to obey their rightful king, Mwanga called out of the assembly "all of you who pray." And all of the Christians, Anglicans and Catholics alike, stepped out, as did a few of the Muslim pages. Another member of the court weeded out the Muslims, and the Christians were condemned to death, marched, with a few casualties along the way, to the traditional royal site of Namugongo, and burned alive on June 3, 1886. The persecutions continued at a lower level for a few years more, until the death of Mwanga and the enthronement of his successor, who was an Anglican Christian.

The entire list of those martyrs whose names are documented can be found at this link.

The Catholic martyrs were canonized in the early 1960's, and to the best of my knowledge this was the first time the Catholic Church had dealt with a mixed group of martyr-companions. Though it will not be the last --- just two examples: Sophie Scholl and companions, known as the "White Rose" martyrs, are a mixed group, Catholic, Orthodox, and Lutheran; and the martyrs of the Guatemalan persecutions, though mostly Catholics, include also Lutherans and Mennonites.

Yosefu, Karoli, and all your companions, and all holy martyrs, pray for us.

We have relics of St. Charles Lwanga in our altar stone.