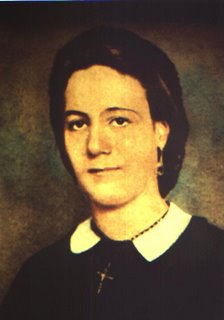 "...... I don't want to be a courtesan! I want to be a nun!"
Today is the anniversary of the death of Henriette DeLille.

Born in New Orleans in 1813, she was a "free person of color" and a pious Catholic child who was being raised to take her place under the social contract of the time as a courtesan. Her mother was a courtesan, her grandmother was a courtesan, her great-grandmother was a courtesan, and her great-great-grandmother was a slave. That's the way things were in New Orleans back then; young free coloured girls would attend the "quadroon balls" where, if they and their families were extremely fortunate, a wealthy white or passing gentleman would choose to be their "protector". In return for companionship and sexual favors, the protector would support the chosen one financially, keep her safe from the worst of the racialist degradations, sponsor the chosen one's education in literature, arts, and social graces, and, sometimes, acknowledge and shelter any offspring. Marriage, however, was out of the question; it was illegal for coloured people to marry whites.
Henriette met an immigrant French sister, Sister Marthe, and learned more about the faith from her as well as followed her in the performance of the works of mercy. And Henriette was very much impressed. When the time came for her to go to the ball and be chosen, she refused. She would be a nun. Her family was very displeased; her refusal endangered the future of the family, who would protect her if she were not chosen?
Once they got used to the idea that she wasn't going to let herself be chosen, her family proposed, for her own future, that she move to another city and, passing, work as a teacher. After all, her brother was already determined to improve his life by passing. But she refused to pass; she saw no reason to be ashamed of being coloured.

In 1836, she and some friends formed a community, dedicated to the works of mercy among the poor of the city, regardless of color or condition of servitude. This community fell afoul of the law and had to be disbanded, because the law said that white people were not allowed to live in the same household as coloured people. The sisters who were white emigrated to France, where they joined other religious communities. Some of the sisters who were coloured gave up the idea of being sisters. But Henriette still had the dream.

In 1842, Henriette and her companion Juliette tried again, establishing the Sisters of the Holy Family, and kept themselves out of trouble with the law by only accepting coloured sisters. Her attempts were successful, but only just so. The sisters were subject to ridicule, hard work, and extreme poverty. At times, the sisters had so little food that they drank sweetened water at night to dull their hunger. But they were happy, because they were making these sacrifices for God and were sharing in the Passion of Jesus Christ, to whom they had consecrated their lives.
Within a few years, Henriette had opened a home for the aged, the sick, and the poor who had nowhere else to go. She was later able to purchase a home, which she used as a community center where slaves and free black people came to socialize and learn the Christian faith. The religious community found creative ways to keep money coming in. That the Sisters of the Holy Family accomplished so much in a time of tremendous obstacles is even more impressive when one considers that for the first seven years there were only three of them.
Even though Henriette's health was never very good, she refused to slow down so long as there were people who needed her. Worn out by her work, Henriette died on November 17, 1862. In her obituary it was written, "The crowd gathered for her funeral testified by its sorrow how keenly felt was the loss of her who for the love of Christ had made herself the humble servant of slaves."

Henriette, holy helper of the poor, pray for us.

I read her story as given by her spiritual director in the Office Readings of the Liturgy of the Hours this morning and was very much moved.

ooops, not so, not so. I actually read the story of St. Elizabeth of Hungary in the LOTH but the parallel is rather interesting.

Thanks for posting this. I don't expect I would have ever heard that story without your post, or the Christian Carnival.